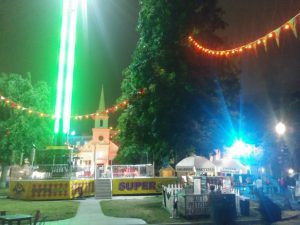 We were blown away with Warner Bros new horror experience this year! This is only the third year for Horror Made Here and we have to say, we were very impressed. We got the Losers’ Club VIP passes (a clever nod to “It”) and we were really glad we did for a few reasons. First, you get 2 free alcoholic drinks and at up to $16 a drink, that can save you a lot. Next, you get a free “It” printed photo of yourself. You also get a ride on Devil’s Drop, and of course, you get front of the line access!

It rained on us, but not our spirits

If anything the rain storm that blew in made the whole night even more magical. The weather started out with some autumn gusts and rolling thunder. The real lightning strikes from above gave Horror Made Here on the Warner Bros backlot the perfect feeling. We managed to get through a couple of mazes before the rain started. At first it was a light sprinkle but as the night went on, it really started to come down. We were really glad we had the VIP passes to not have to stand in the lines and get drenched.

This maze was a little different than what we were used to. We were taken by a “paranormal” guide from one section to the next, where we were held in each room or area for just long enough for something terrifying to happen. This was very effective in really building up the suspense. There were some exceptionally good scares in this maze. They really made us jump. Utilizing one of the backlot practical set houses allowed for amazing detail throughout. This one has the very Annabelle doll from the films and she is every bit as creepy, if not more, in real life! This was a great attraction! Don’t miss it! 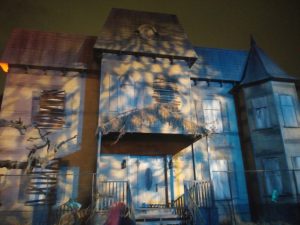 It Knows What Scares You

This was the maze we all came to see and it certainly did not disappoint us. Pennywise was waiting for us throughout and what we really liked was how he interacted with us so much! Pennywise himself presented us with the infamous 3 doors of scary. He showed us what was waiting behind them for us, one by one. But it’s not just Pennywise that will terrify you. We were caught off guard by Georgie a few times where he really got us, too. We loved the immersiveness of this one! Stephen King would be proud. Be sure to see it! 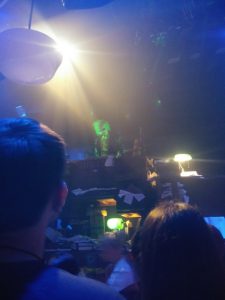 Such a great maze! This one was not so much scary but it was still really fun to experience, none the less. The Joker has taken over Arkham Asylum and has invited you to come see what he’s done with the place. We’ve seen a few live characterizations of the Joker and we have to say, this was the best we’ve ever seen. The makeup was truly amazing! It was also so much fun to see Two-face, The Riddler, and Harley Quinn inside. The acting was really top-notch. I really wished there was a permanent attraction like this at Six Flags! It was really that good! 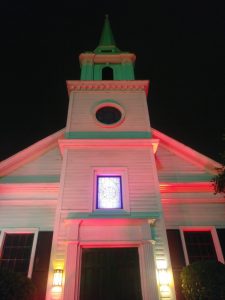 The Exorcist: The Forbidden Screening

We want to be clear that this is not a maze, but it was a fantastic experience that was every bit as good (if not better) than a traditional walk-through. This experience combines clips from the original classic and a barrage of effects in the theater that will scare the hell out of you! There were so many details in this experience; we don’t want to give anything away, but be sure you look around as you watch. You could tell that a lot of horror love went into creating this amazing immersive encounter! Absolutely don’t miss this! It was our favorite! 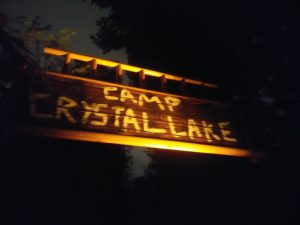 Freddy AND Jason at the REAL Camp Crystal Lake! The “campy” jokes from the shuttle driver had me a bit worried that our tour of Camp Crystal Lake was going to be a bit cheesy, but we couldn’t be more wrong. Once we got off the shuttle, we walked strait into Camp Crystal Lake. It was really like walking right into the movie. The rain made the whole experience all the more real, too! A nearly 7ft Jason tormented us around the woods while Freddy lurked around corners inside the buildings. There were some seriously great scares in this walk-through. One of the best was a set of hanging bodies in the cabin. Be sure you go with a group of screamers on this one; it will make the tour all that much more fun! 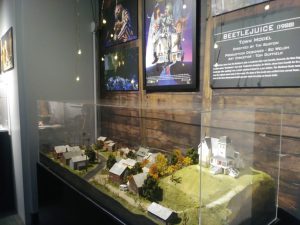 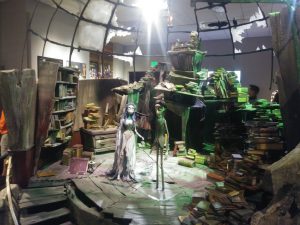 When you get off the shuttle from Camp Crystal Lake, you end up at Studio 48. This is Warner Bros usual studio tour gift shop but it also has an exhibit hall you absolutely DO NOT want to miss! Just for Halloween, Warner Bros has added many Tim Burton favorites in the exhibit hall; items from The Corpse Bride, Sweeney Todd, & Beetlejuice, just to name a few. There were many other actual movie props and costumes as well; even a very special one you would have found on Elm Street.

Fangtasia, Devil Drop, & the rest of the backlot was a horror playground!

We took a little time to enjoy the rest of the backlot between mazes. Fangtasia was great; a perfect place for some great photo-ops. We will say the drink prices were crazy expensive, but the drinks were good. This is where having the VIP pass is nice to save some dough. We played a few games in the Lost Boys arcade; a wonderfully nostalgic ’80s arcade that included wanted posters all over, just like the movie. There were some really nice touches on the backlot that included a projection of Audrey 2 in the second story above the Little Shop of Horrors gift shop. Be sure you catch Bette Davis and Joan Crawford wherever you can! They were a delightful riot to interact with! We saved the Devil’s Drop Tower for the end (because the lightning earlier had shut it down). It was a great scream to end the night!

We can’t wait for next year!

Warner Bros Studio Tour Horror Made Here is not cheap! The premium you pay is what keeps the whole event more exclusive but also the level of acting, set details, and effects superior to other haunted attractions. Weather you pay for the regular admission or the VIP pass, we still say the whole experience is well worth it!