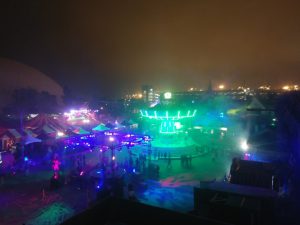 I was absolutely impressed! This was my first year and I had heard a lot about this event. As a result, I didn’t expect Queen Mary’s Dark Harbor to live up to the hype, but it did. I would even go as far to say it surpassed my expectations!

Everything wrong is just so right!

It feels like a fair that has gone terribly wrong. Maybe it’s the swings (from Neverland Ranch), the twisted carnival performers, or just the smell of food in the air. Queen Mary’s Dark Harbor has enough frightening fun for all ages (well some ages, you know your kid, not me) but it stands out as the attraction to hit if you are over 21.

Why? There are bars everywhere. There are bars INSIDE select mazes some are hidden, some are not. It is fun to try to find the hidden ones. Inside these bars are buttons that allow you to interact with the mazes. For example you can blast people with air or water in one particular bar.  I swear it’s way more fun than it sounds. 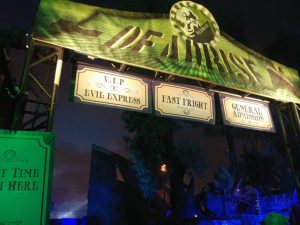 The mazes are a-maze-ing!

From the opening of the gates, where The Captain and the Ring Master come out for introductions and to set the monsters loose, I knew I was going to experience something unique, and I did. Queen Mary’s Dark Harbor had three of their mazes this year based on stories from the Queen Mary ghosts. These mazes take you throughout parts of the ship that on their own are creepy. Throw in some monsters and some total blackout areas and you are going to scream. Or at least I certainly did, a few times. 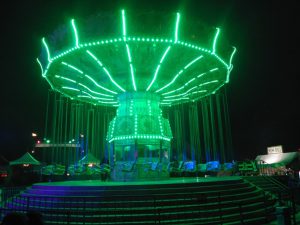 Yeah, but was it scary?

There are some good scares at Dark Harbor. As I mentioned I screamed, more than once. It’s my new, must do attraction. Everyone should go for the Halloween but stay for the Queen Mary because the ship is a story, all her own, as well.