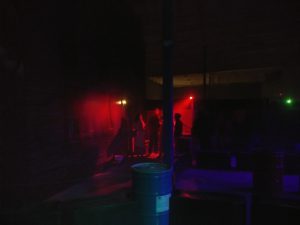 We deiced to hit up a smaller haunt closer to where we live and tried out Bakersfield’s Scare Valley. This haunt was put together by the same folks that once made Talladega Frights, over on the west side of town. They sold that property and have moved over to the new Track House Karting facility (formerly BKE), near the new BLVD complex off Buck Owens Blvd. You enter through Track House (which looks like a lot of fun, by the way) and wander on through to the back after buying your wristband at the Track House sales counter.

The theme of the haunt is something like an old hillbilly farm house. Think, Deliverance. The line queue certainly did a great job building up the right feeling. The entrance to house looked pretty good. We loved the smoke machine, lighting, and giant spider on the wall. Inside we found some really good scares, right from the start. The actors did a good job staying in character and creeping us out. We were impressed with the fact that they had quite a bit of great details in their sets, too. The vortex tunnel that they have inside was probably one of the best effects they had. The idea is that the house has trapped you and taken you into some sort of hillbilly hell. It was a good maze, overall.

We were really happy to see that there was a lot of space for the haunt; this location definitely has a lot of potential. Unfortunately, this is where we were just a little let down. The haunt is pretty short. For the price, we think we could have gotten a bit more time in the maze. We are very hopeful that next year they will take advantage of the space and really give us more. This is their first year there and it can be tough to go big, right after a location change. Hopefully, the maze is more full of monsters nearer to Halloween, (which it should be) and you will have a better experience.

Was it worth it?

Well, that depends. We went on a Sunday, opening weekend so there were hardly any people in line and that was really nice. Our thought was, although it’s pretty good, it’s a little short and it’s not quite worth the full $15 price. We recommend getting the Groupon or using their own discount from their web site and go right when they open to avoid waiting an hour for 5 minutes of a scare. If it’s the only chance you will get to go to a haunted house this year, you should definitely check it Bakersfield’s Scare Valley. Like we said, there were some really good scares inside!