A fantastic Halloween and horror event!

This year, Universal Studios Halloween Horror Nights is a true frightful feast for your eyes! If you are looking for the ultimate experience where your favorite horror movies and shows come to life, this is the place to go. Not only does Halloween Horror Nights bring horror from the screen to life in amazing detail, they change all of their walk through mazes each year. They do bring back a lot of the same characters but usually, the mazes are very different, each time.

The main reason we get the early entry tickets (2 pm) is to ride Harry Potter and the Forbidden Journey and check out The Wizarding World of Harry Party before it closes. It is not a part of the event so we like to slip in a little magic before the horror. The other reason to go in early is some of the maze lines open early. This is the only way to do this event… take our word for it.

What was different this year at Universal Studios Halloween Horror Nights?

You can LEAVE THE PARK one time. In the past, this was not an option. It’s nice to be able to leave the park to eat or drink or check in to your hotel. We did all of these things. There is a time, between 7-9 pm, when the park can get really full. People with early entry are in the park and at 7 pm, everyone else start to flood in. The lines get long during this time. Later in the evening the lines will get short again and you will be able to get through the line queues at Universal Studios Halloween Horror Nights much quicker.

If there was anything we were dying to see this year, it was the Stranger Things maze! If you want to see this and all the mazes in one night, this is where the early entry ticket is a must. With it, we were able to get in line early for Stranger Things. Be sure to get down to the lower level by 5 PM because the attraction will open by 5:30 PM. This is the most popular maze so this is pretty much the only way to get through it quickly without a front-of-the-line pass.

It had all the feels

The maze definitely included all of the elements you would expect; Will’s abandoned bike in the woods, the mysterious facility that kept Eleven captive, Hawking’s Middle School, and of course, The Upside Down. Everything in the maze was very well done. You could tell that a lot of love went into every detail of this attraction. It was so good, in fact, we wonder if they might make this a permanent attraction, like they did The Walking Dead.

Our only complaint is that although The Upside Down was fairly well done- it was far too small! It was roughly 12 feet high to give some height to the trees but the whole room’s footprint was probably only about 16′ x 16′. We were really expecting this part of the maze to be enormous. You didn’t really get to walk through it, in an immersive way, like you might expect; it was mostly just along one wall. We might be too harsh here because the rest of the maze is really, really good, but seriously, I think we speak for the fans here, “We wanted more!“

This was a pretty faithful recreation of a horror favorite. Trick ‘r Treat had one of the best facades of any of  the mazes. (Speaking of which, Stranger Things had absolutely NO FACADE!) There were plenty of great scares but the best part was the perpetually vomiting kid on the stairs. So gross and yet so fun to watch! The werewolves are great, even though they looked reused from American Werewolf in London. Over and over you can expect the Voodoo doll faced Sam to keep you on your toes throughout the maze. This one is in the lower lot but you will probably want to hit it on your way back from down the hill.

Poltergeist turned out to be our second favorite maze at Universal Studios Halloween Horror Nights. It was very popular with everyone else, too so be sure to get to this one, right after Stranger Things. The static playing on the TV with Carol Anne’s little hands on the screen was such a haunting scene to see in real life! There’s a great projection effect they use with the static screen that we are pretty sure you’ll get a great scream out of! When we walked into the kitchen, it felt exactly like we were in just about anyone’s kitchen we had ever been in during the ’80s.

We don’t mean to make too much of a thing out of this, but it was really so well done, it felt like we went back in time. It added to just how creepy everything in the maze felt. They did such a great job recreating the “mirror” scene- very freaky. The best part is near the end with a barrage of the dead in open, standing caskets. You have no idea which is real or a dummy and it’s terrifying all the way through! This maze is so good! Don’t miss it! 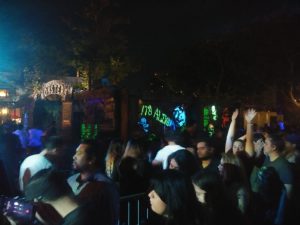 Our most favorite of all the mazes takes us back to the classics, Universal Monsters! Here is where you get to see all of Universal’s classic monsters come to life! Dracula, Frankenstein, The Wolfman, The Phantom of the Opera, and even The Invisible Man, are all waiting inside for you! There were amazing scares throughout this maze and lots to look at, too! These are really all the “classic” monsters that we think of, when we think of horror & Halloween. You could really tell that Universal Studios Halloween Horror Nights put a lot of love and care into this maze. A really awesome and supersizing scene they incorporated was from The Invisible Man; all done with black-light effects. It really looked like he was invisible! The monster payoff scene at the end of the maze (we won’t give it away) was amazing and one of the best we’ve seen HHN ever do!

The First Purge, The Horrors of Blumhouse & Halloween 4 were all pretty good. If you have the time, you should check them out. Each one of them had some really good stuff, but honestly not too much that was notable. We did really like seeing all the different ways the victims got “Unfriended” in the Blumhouse maze and Halloween 4 had some really fantastic sets, that were faithful recreations from the film. All throughout these mazes, you are sure to get some good scares from them, too!

The tram was fun, as always. Universal revisits Hollywood Harry, a clown infamous for terrorizing the backlot. We love the story build up on the tram and the best part is when you get off and walk right into a band of freaky dog-faced assailants that chase you with chainsaws! You will also get to venture through the REAL Bates Motel set and can have your picture taken on the porch of the REAL Psycho house with Norma Bates, himself. The walk-through at the end has some good scares, too. Watch out for those clowns!

If you were lucky enough to go this year, we want to know; do you have something that was your favorite part of Universal Studios Halloween Horror Nights? Please tell us in the comments below!