We’ve always enjoyed Six Flags Magic Mountain’s Fright Fest but this year, we were honestly a little disappointed. Not to say though, that there weren’t some bright spots. We started our night by getting our maze wristbands then heading over to the new Metropolis area and had a beer at the Metro Park Pub. We recommend going on a Sunday and not bother buying the Flash Pass, as the lines will be fairly short (unless it’s the last week of October).The weather was perfect and we were ready for a good night of fright. We decided to head up to the front where there are 3 of the 6 mazes in the park. This is a great strategy to start there first and get those mazes in while the lines are short. 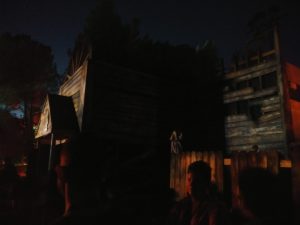 We were really impressed with this first maze we hit up. This had a lot of really great distractions that led to some great scare opportunities. They were really short staffed on just the second night (on a Sunday) of Fright Fest but they were able to pull off some great scares in here- very impressive. We loved the projection effects of bugs scurrying around and there’s a great “gotcha” where someone is waiting for you in a cupboard, in just the right place. For the claustrophobic, there’s a great “alternate” path you can take to push your fears to the edge.

And here’s were our disappointment starts… This was a really great maze like 10 years ago, when they first put it in. There was pretty much nothing done to this maze to even try to update it. It’s the same as it ever was. We like the concept, but seriously, why can’t you change it up to make it different Magic Mountain? It would be great to see the giant statues animated somehow with some simple puppetry. And the giant spider could use some serious help to be more terrifying. You won’t miss much by skipping this one.

So this one was kind of like the old Vault 666 maze from last year but it was really not better at all. In fact, we really liked the old Vault 666 maze. All this one seemed to be was a really terrible tie-in to a b-horror movie that Six Flags got conned into to promote. I’m actually curious to see the movie just to see how much this maze had absolutely nothing to do with it. To be fair, we did see some of the stuff in the trailer in the maze but not much more than a couple of rooms where they really seemed to miss an opportunity for a good scare. You can skip this one too, if you like. Ride Goliath in the dark, instead. 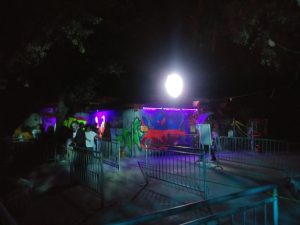 This is the second completely new maze in the park and it’s definitely worth your time! We love the 3D mazes in general but this one had some really good surprises. There is one room that uses a projection effect that works really well to convince you that you are about to fall into an abyss if you step off of the edge of a very precarious path. It’s a fun maze with some originality and a few good scares; go check it out.

This was another one that Fright Fest has kept each year for a while and this time it was actually quite a bit better. We aren’t sure what was done differently with the layout, but it felt much more confusing (in a good way) and paced out well. It also felt like a longer experience. We love the apocalyptic scenes mixed with the great scares from all the zombies and other mutated monsters in this one. Plus, there’s huge fireballs being blasted the whole time, and that’s always awesome to see! 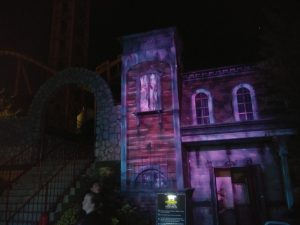 This is one of our favorite mazes Fright Fest has kept around over the years, and in this case, we like that they do. Mostly because the building they set this up in lends itself well to the beautiful large interiors they have created for this Victorian era haunt. We really liked the projection effects throughout. We love the carriage and various other authentic props you will find inside. The Attic was especially impressive. It was a great maze overall but almost nothing in it had changed from last year; a little disappointing that they couldn’t change up a room or two. We also felt that it was a little under stocked with monsters. Perhaps on busier nights it would be better.

Fright Fest’s Scare Zones LOOKED great and we were delighted to see that there were two new ones– except that 3 of them were empty of monsters when we got to them! Yeah, so apparently the last hour of the night, all the monsters come up to the front. Well perhaps that makes for a great send off to the crowd leaving but it makes for a terrible experience in the rest of the park. We really can’t understand why at least a few monsters couldn’t have stayed behind in the scare zones. We missed out on 2 of the scare zones because of this. If we had known that this would be the case, we would have made sure to hit up all the scare zones earlier. This fact is not printed anywhere on their materials, so be sure you know about this, before you go. We reached out to Six Flags Magic Mountain to let them know about this so we hope they fix this issue before you get there, or at least before next year. 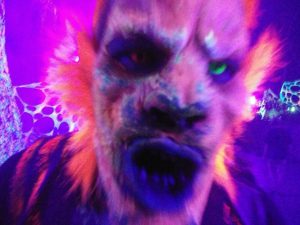 Worth it? Well, just barely

We would say that if you are already a season pass holder or member, you should definitely come see Fright Fest. If you bought your admission just to see this though, you might not feel that you got your money’s worth. We really think that Six Flags Magic Mountain’s Fright Fest should really consider investing in a couple more new mazes. It seems like there really should be about 8 instead of 6 to offer a bit more variety. The scare zones are fine, as long as they keep the monsters in them. The rides in the dark are great; so if nothing else, skip a few of the “meh” ones we listed here and go ride a few of those; Goliath and Batman are fantastic in the dark!