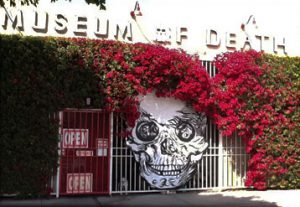 Museum of Death cost:
$17
Was it worth it?:
Yeah, but only if you’re into that kind of thing. Which I am.

What Do They Have?

They have a lot of stuff, so much stuff you can’t take it all in. Or at least when we went it was too hot, stuffy, and crowded to want (or be able to) take it all in. They had a lot of fans going but it wasn’t great. I do not suggest going on a very hot day.

People Do Pass Out!

We’ve heard the stories that people puke or pass out at the Museum of Death. It’s true they do; we saw two different people being assisted while we were waiting to get in. Due to this, my expectations were high. After my walk through I wondered if it was from the heat. Even though I was hot and bothered it was still worth my time and money because, as I said, I’m into this kind of thing. If you aren’t fascinated with serial killers, murder, morgues, funerals, car accidents, taxidermy, poison, a mummified head, or just death then it’s not for you.

The 1st room is full of the art of serial killers and was maybe the most interesting of all the rooms in my opinion. Some of it was disturbing, some not great, some really good. I would have loved to get pictures for you, however, no phones are allowed so you will need to go check it out for yourself if you want to see it. Also, no backpacks are allowed they make you check them in the front. I was able to take in my purse though.

There Is Something For Every “Body”

The set up is a lot like a museum so “don’t touch”. There are literally odd and curious things everywhere. Some of it you have seen, like crime scene pictures of the Black Dahlia Murder. Some of it you haven’t but I don’t know the depths of your obsession so you’ll have to check it out for yourself.